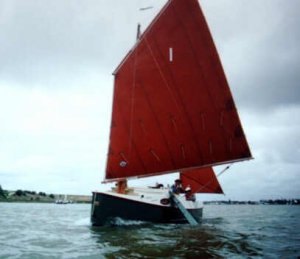 Trailer-Sailer (Often used as a caravan due to its light towing weight).

What makes this trailer sailer unique in my opinion -
1. The free-standing mast, mounted in a tabernacle. So, no rigging to renew every 10 years and no struggling to get the mast up, simply hold the mast and walk forward, one person only less than 5 mins.
2. Water ballast makes her extremely light easy to tow. Leave the ballast out and she becomes a very good boat to row and fast to motor

Please note: I have many reviews of the design. If you are interested, please send me an email address for an information pack.

History, as far as I know (Vessel name: Shirley Valentine)
I am the 4th owner, purchased 2020
I purchased her from the 3rd owner who had owned her for approx. 4 years, before that she spent some time in Gladstone QLD (Thanks to Tony for this history update, since the add went live). I found her high and dry in a large farm shed west of Nowra N. S. W she had received a nice 2 pack spray job in white. (She was originally dark green. ). White by the way was Bolgers recommended colour for this design.

Built by Master Shipwright and boat builder Graham Cheers (as a keeper, which he did for approx. 20 years) in Camden N. S. W. Prior to his retirement and launched in 1997. The attention to detail and thought that has gone into this boat is amazing. Graham was in communication with Phil Bolger (the designer) throughout the build and refit after 10 years of use. I have some of the letters.

Graham selected this design due to her ability to reach places most other vessel could not, with the leeboards (and 7 inches draft) she will keep sailing while most other boats would be aground. Graham liked reaching inaccessible places in rivers and lakes, getting back to nature and camping, without the crowds. Graham sailed her around Australia by road (using her as a caravan) visiting every lake and river along the way (He sailed the full length of the Murray River) and participated in many races against local boats of similar size and beat them all!

I towed Shirley Valentine to Katoomba (1800KG towing weight), with the intention of doing something similar to Graham Cheers. Covid hit not long after and things changed for me. I now live in Sydney. Shirley Valentine is still in Katoomba and now needs a new home. She is well looked after with a full cover and the only cost of ownership is trailer rego of $190 and vessel rego of $148.

I have replaced the battery and had an extra-long shaft two-stroke outboard built for me. (Zero hours). It has 6HP on the cover but it's an 8HP. I prefer a two stoke mainly due to weight and ease of transport. The trailer is fully registered, with new tyres and bearings.

Both the boat and trailer are in excellent condition. The reason this boat and bespoke trailer are as good as new (they were built to last) is credit to her original builder Graham Cheers. Graham documented everything including step by step instructions on how to launch.

This design is featured in Phil Bolger's book Boats with an open mind.

Remember, if you are interested in this vessel, I have, many reviews (Like the one below) in PDF format, so send me an email address and I will send you an information pack.


Mike O'Brien, senior editor of 'Wooden Boat' magazine, says in #80,'Built as drawn, Martha Jane should be self-bailing, self-righting, unsinkable, easily trailerable, and fast under sail. She's a most significant sharpie. ' For those who want a fast, comfortable and trailer able cruiser for two, or a spirited day-sailor for more, Martha Jane is the boat. No other small sharpie even comes close.

Phill Bolger's Martha Jane is the smallest possible true sharpie with adequate accommodations for two. It is well known that good sharpies offer the most performance for the least investment of time and money. This makes Martha Jane a wolf in sheep's clothing, as she is an owner built boat that will out sail and outclass most other boats her size. Martha Jane might look old fashioned, but she is actually a very modern yacht. Her 500 lb. Of water ballast gives her power under sail and the safety of being self-righting, dump it out for ease of trailering. Her balanced lug sail cat yawl rig sets a lot of sail down low and is powerful and efficient both on and off the wind.

Her tabernacle mast can be easily lowered for ease of trailering, to get under low bridges or escape a real blow. Her leeboards, combined with her kick up rudder, make her a true shallow water sailor without the maintenance headaches or interior clutter of a centreboard trunk. Of course she is self-bailing.

Mike O'Brien, senior editor of 'Wooden Boat' magazine, says in #80,'Built as drawn, Martha Jane should be self-bailing, self-righting, unsinkable, easily trailer able, and fast under sail. She's a most significant sharpie. ' For those who want a fast, comfortable and trailer able cruiser for two, or a spirited day-sailor for more, Martha Jane is the boat. No other small sharpie even comes close.

Sharpies, in their simplest flat bottomed form, hold strong fascination for sailors and architects. They offer, perhaps, the most performance for the least investment. Martha Jane is the latest thin-water cruiser from the board of Philip C. Bolger --an acknowledged master of the modern sharpie design. Don't be misled by the little yawl's radical appearance. Almost every detail of rigging and hull design has been proven in her designer's earlier work.

Bolger's sharpies always show adequate rocker in their bottoms, and heels of their stems are carried well clear of the water. This configuration reduces cross flow at the chines, resulting in better performance--particularly in light air. The docile steering demonstrated by these shoal-draft cruisers will be appreciated by anyone who has wrestled with sharp-ended flat-bottomed boats in heavy weather.

You'll notice that this new sharpie has rectangular sections. Her sides stand perfectly perpendicular to the water's surface. Weren't we brought up to respect flare as one of nature's absolutes? We might have argued about how much was appropriate, but that there would be some flare was never in doubt. Be that as it may, arguments can be presented in favour of rectangular sections. For boats with Martha Jane's proportions, vertical sides can result in nicely drawn-out waterlines, maximum initial stability, easier construction, and slightly reduced materials costs.

Some plumb-sided skiffs and canoes have earned reputations as ugly, bad tempered monsters. These very small craft are usually unballasted, and the crew weighs much more than the boat. If, as the load increases, the depth of the immersed rectangular section becomes too great compared to its width, there are problems. When the boat is healed, the centre of buoyancy can slip to the wrong side of the centre of gravity with alarming suddenness, causing almost instantaneous inversion. With her predictably lighter relative loading and greater beam producing shallow immersed rectangular sections, Martha Jane (carrying 500 lb. Of seawater ballast) should display a reasonably friendly stability curve.

You might object to vertical sides on aesthetic grounds; perhaps they--along with painfully dry white wine, black olives, and your favourite music--represent acquired taste. Bolger summed up his feelings about this controversial matter in a letter to a British Boat builder: 'I'm convinced that these rectangular-sectioned boats are functionally superior as well as highly economical of time and material, but it's hard to get the point across... As most people can't grasp that the behaviour they like is due to the looks they don't like.

Martha Jane's construction plan shows Bolger's clean and clever way of working with plywood. A few bulkheads combine with stringers to produce great rigidity without the clutter of extensive transverse framing. Virtually every element in the design adds to the boat's strength--sliding hatch rails serve as supporting girders for the deck, and leeboard guards strengthen the sides. Assembly is 'instant boat' fashion--a refinement of traditional skiff-building methods. Bolger provides drawings showing the real or expanded shape of the sides. These are recreated at full scale directly on the plywood, cut out, and wrapped around the moulds. True lofting and building jigs aren't needed. This is easy work for rank amateurs and fast work for experienced hands.

Leeboards have become a trademark of Bolger sharpies. Because they live outside the hull, the boards don't intrude on the accommodations. The boat need not be holed for their installation, and the single biggest maintenance problem for shoal-draft wooden boats--the centreboard trunk--is eliminated. A leeboard need work on only one tack, and it can be oriented for maximum efficiency on port or starboard. The working board angles away from the hull, presenting a perpendicular face to the water as the boat heels. A small amount of toe-in relative to the boats centreline increases lift (some designers specify asymmetrical foils for this reason), but Bolger cautions against overdoing it. In extremely shallow water, leeboards remain effective long after centreboards must be fully retracted.

Because they are ballasted only enough to make them sink readily, the immersed working leeboard 'weights' virtually nothing. At the same time, the other board rides completely clear of the water; its full weight in air helps keep the boat on its feet. In effect, you have an uncomplaining crew member who is willing to hang 6" outboard of the weather rail forever.

For this sharpie, Bolger specifies traditional Flemish leeboard 'hardware, ' consisting of stout rope. As the boards are lowered the loops tighten, holding them firmly in position. Yet the weather board can 'broken wing' (swing away from the boat) if it's left lowered. For short-handed short tacking, both boards can remain down. They're quite happy that way, and--because the rig is self-tending--the skipper need only point the tiller properly.

The kick-up inboard rudder is a new Bolger creation. Unlike blades that retract in into trunks, this arrangement should permit steering even when it's partly lifted. The designer describes its geometry as being the outcome of 'excruciating mental effort.

Her unstayed rig can be struck in minutes--handy for trailering and comfort in a blow. The mainmast stands in tabernacle; with proper counterbalancing (about 90 lb. Of lead), swinging it should be a one-handed operation. Measuring just 16' in height and 3" square at the partner, the mizzenmast will present no problems.