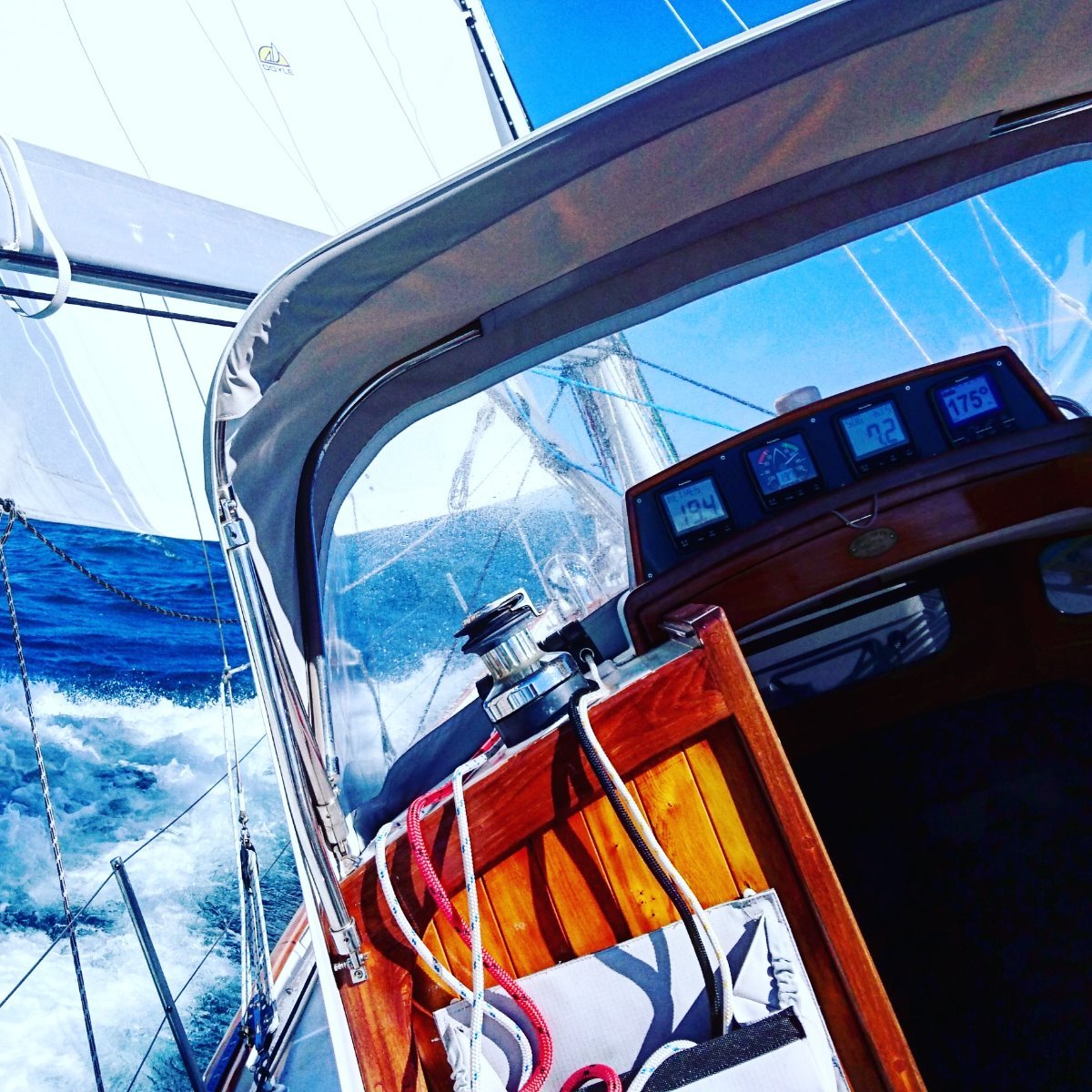 "NELL GWYN", WITH HULL CLEANED & POLISHED, ANTIFOUL & PROPSPEED RECOATING COMPLETED, IS NOW SAFELY BACK IN HER HOME PORT OF PORTLAND IN SW VICTORIA. SHE CAN NOW BE INSPECTED IN HER NATURAL ENVIRONMENT - THE SOUTHERN OCEAN.

BUYER INTEREST REMAINS HIGH AND SHE IS STILL PRICED TO SELL AT $165,000.
IF YOU ARE SERIOUSLY INTERESTED IN THIS BEAUTIFUL, HISTORIC VESSEL, COME AND SEE HER NOW THAT COVID-19 RESTRICTIONS ARE LIFTED. CALL CYRIL ON MOBILE +61 408 320 042 AND AT LEAST REGISTER YOUR INTEREST.

The beautiful, John Alden designed "Off-Soundings Class" Cutter "Nell Gwyn" is a rare and unique Classic Yacht. Constructed of double diagonal 3/4" thick Huon Pine planks, both hull and deck, at 73 years young she remains a brilliant testament to the skill and artistry of early 20th Century Tasmanian shipwrights. The sheer volume of Huon Pine in this yacht is staggering, considering that this, the best marine timber in the world, is now unobtainable in the quantity found in Nell Gwyn - and consequently priceless and irreplaceable.

Nell Gwyn is on the Australian Register of Historic Vessels, ARHV Number HV000249. She is an interesting hybrid - built in double diagonal Huon Pine planking on stringers, combining an American design, a New Zealand construction method and Australian timbers. For its time, this was an unusual and extremely high quality construction method, compared to the more typical build of a carvel planked hull on frames. The planks are copper fastened to each other and to the supporting structure. The hull has fore and aft stringers with no frames, only floors, while the deck is supported by beams. Large section timber floor frames join the keel to planking and fasten 4.2 tonnes of lead ballast to the hull.

The construction method closely follows the triple and double planked method used by the Logan family in New Zealand to build all of their yachts, where Logans took advantage of the qualities of the local Kauri timber. Tasmanian Huon Pine is, with Kauri, one of the finest woods for yacht building. It appears that Nell Gwyn's construction is a unique example of a yacht diagonally planked with Huon Pine. The planks used are full length, up to 40' long, cut from logs recovered from lakes and rivers on Tasmania's west coast. The planks were clear timber (no knots) and were fitted so accurately that no caulking has been used at the seams.

The Alden design features a classic long keel profile, with a long counter stern and spoon bow. It is an ideal craft for off-shore and blue water sailing, with wonderful sea-keeping qualities.

Construction of Nell Gwyn took just on 10 years, 1937-1947. Initially commissioned to be built as a racing yacht by a Justice of the Supreme Court of Tasmania, she was built in the Timber Yard of R F (Frank) Hickman at Moonah, Hobart. Part-way through the project the Judge withdrew his backing and Frank Hickman completed Nell Gwyn as his own boat. It should be noted here that Frank Hickman was uncle to the late, highly esteemed Australian yachtsman and Sydney-Hobart Race Winner, Roger Hickman. World War II intervened before Nell Gwyn was completed; work resumed post-War and she was launched in 1947. A small brass plaque screwed to her doghouse commemorates the occasion.

Nell Gwyn was raced hard and often in the Southern Ocean races of her era by her owner and Skipper, Frank Hickman. He raced her in 6 iconic Sydney-Hobart Races - 1948 (retired); 1953,1955,1967,1968,1969 - all completed. Nell Gwyn's most recent Sydney-Hobart was the 50th Anniversary Race in 1994, when she was owned and skippered by J Carney of Brisbane. Post-1994, Nell Gwyn was purchased and refitted as a cruising yacht by S Mata Luque of Mooloolaba, Queensland and cruised in North Queensland coastal waters.

Nell Gwyn was purchased by her current owners, Cyril Suggate and Megan Pilkington, in Mooloolaba in March, 2012.

For over 7 years now, Nell Gwyn's current custodians have been under the thrall of her sea-kindliness, her stability and dogged power under adverse conditions and her fleetness of foot on a broad reach. She is no slouch to windward either.

Nell Gwyn underwent a 3 year major refurbishment and refit out of water and under cover between January, 2014 and December, 2016, including stripping back to bare timber and glassing of her external hull, in the workshop of Shipwrights B R & S M Webber, Williamstown, Victoria. The hull was heavily glassed externally using epoxy resins and polyurethane type two-pack paints to give a long-lasting maintenance free finish. During this process, everything attached to her still stunningly sound Huon Pine hull and deck was inspected. Anything found to be tired, worn or "dodgy" was refurbished or replaced, as follows:

o The cockpit, coamings, cockpit seating and locker entry spaces were reconstructed to give better working space and allow for a more modern steering system (Quadrant & Cable) to be installed.

o The bow stemhead fitting was redesigned and new, replacing the original.

o Stanchions and bases are new and thru bolted.

o All original metal fittings removed and polished to as new and refitted; other non-stainless steel fittings chrome plated and refitted.

o Replacement Raymarine electronics in way of wind instrumentations also fitted to mast along with VHF Cabling and Aerial, including AIS Transceiver.

Nell Gwyn's highlight passage since her refurbishment was sailing from Portland, Victoria to Hobart, Tasmania in February, 2017. Sailing via King Island, then non-stop eastwards across the north coast of Tasmania and south down its east coast (reaching speeds of just under 14 knots at times, thanks to a 45 - 50 knot north-easterly gale lifting her skirts); thence across Storm Bay (yes, there was one of those also..... ), Nell Gwyn presented in all her splendour at the Australian Wooden Boat Festival, 2017.

Nell Gwyn received popular attention at the Festival, in part due to her advent from, and continued connection over many years with, the Hickman family. Several former owners, skippers and racing sailing crew were overjoyed to see the Grand Old Lady in her classic livery with modern upgrades, giving her at least another 70 years of sailing.

Following the Festival, Nell Gwyn completed her circumnavigation of Tasmania, sailing south from Hobart via the D'Entrecasteaux Channel to Recherche Bay, then passing between Maatsuyker and Mewstone Islands at the southern tip of Tasmania (in the teeth of a north-westerly gale) to safe haven in Port Davey, on Tasmania's rugged southwest coast. Upon leaving Port Davey it was non-stop to Portland, Victoria, on a virtual broad reach under the influence of a fresh and sustained south-westerly.

Eventually, regretfully, all adventures come to an end and so an opportunity is now offered for someone else to fall under Nell Gwyn's spell, to be beguiled, seduced indeed, by her many charms..... And so to purchase her..... Priceless though she is.....

This lovely vessel, now meeting the market and described recently by one pundit as "the loveliest I have ever seen", will be sold.

Act now and avoid the disappointment of someone else sailing her out of your dreams.