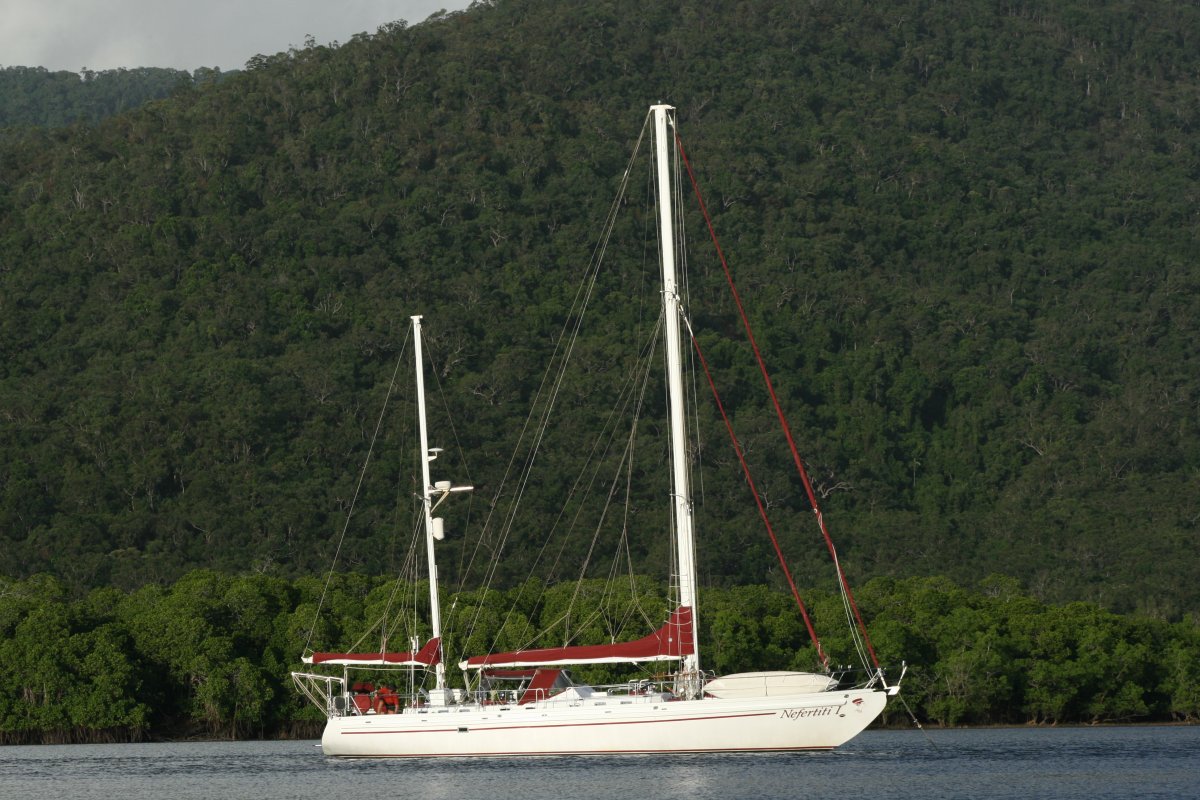 
This is your opportunity to own this beautiful, and meticulously maintained ocean going yacht. The current owners are the third owners of this magnificent vessel since launch in 1981. Nefertiti 1, is one of the well known and trusted Roberts 53 designs which was altered and strengthened by accommodating extra ribs and stringers to allow a swing centre board to be incorporated.
The hull was professionally built at the Genoa shipyard in Geelong, hand laid GRP over a male mould using alternative layers of chopped strand and woven rovings. There are few yachts of this design that boast a solid fibreglass hull as she does.
The current owners, in their sixties, have sailed this yacht as a couple for 12 years. After sailing for 4 ½ years in South East Asia it was their intention to round the Cape of Good Hope and continue further, however family health problems influenced their decision to return to Australia, and, alas, list this stunning yacht for sale.

Nefertiti 1 was commissioned to be built in 1979 by her original owner Mr Graeme Ireland and was built in the Genoa Boat Building facility in Geelong Victoria. Basically a Bruce Roberts 53 design the plans were modified to include extra ribs and stringers and to allow the fitting of a swing keel. The hull was constructed of GRP, hand laid over a male mould. The lay-up of the hull was done by Mr. Jim Stuart who later became production manager for Cougar Cats on the Gold Coast before going on to design, build and market his own range of yachts. The fitout was completed by Graeme Ireland and the vessel was launched in 1981.

She was initially surveyed by Michael Rikard-Bell & Associates in 1983 and subsequently in May 1985 with the ship afloat and again in 1986 on the hard. Graeme Ireland sailed Nefertiti 1 to Singapore in 1986 where he had business interests. During the following 7 years the ship cruised extensively in S. E. Asian waters and occasionally even competed (quite successfully) in local Club regattas.

In 1993 she underwent another survey, this time by Hull Search of Brisbane prior to being sold to Jim Stack. In October 1993 she left Singapore for Brisbane. During 1994 and up to mid 1995 the yacht was given a complete refit and repaint. In 1997 she was sailed to Sydney and back and since then has had several trips to the southern Great Barrier Reef islands and beyond, the longest being a 6 month cruise to Cairns and back in 1999/2000. In May 2005 she was again given a major overhaul on completion of which she was surveyed by Paul Slivka. She was sold to her present owners in 2008. A pre sale survey was conducted at Scarborough and at Brisbane Shipyards by KPS Maritime in March 2008.