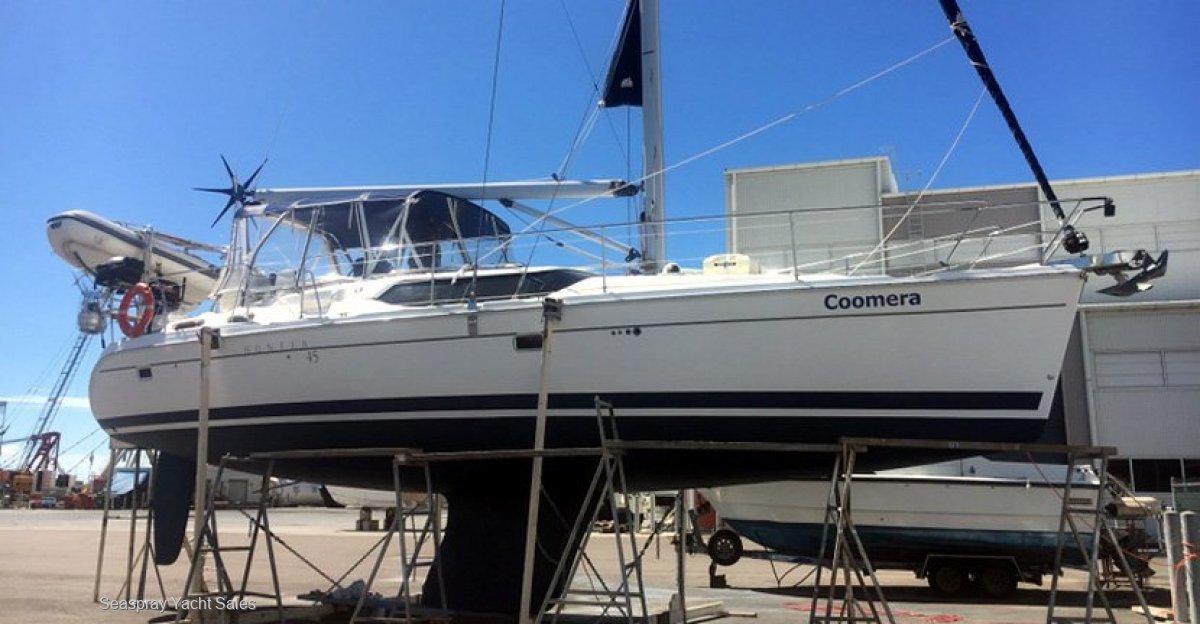 
Commissioned to be built by Hunter-Marlow, USA, in 2007, this immaculately presented Hunter45CC monohull is being offered for sale. Currently berthed in the world class Rebak Marina on Langkawi Island, Malaysia, she is already based in one of the most beautiful, and convenient cruising grounds in the world.
She looks almost as new as the day she was delivered to Australian shores in 2008, after having been delivered to her first owner into Victorian waters, where she spent the first 4 years of her life.

She was then sailed by her current owners from the far south coast of NSW, Australia, in 2012, along Australia's east coast to Thursday Island, across the Arafura, Banda, Flores and Java Seas, through Indonesia, and up the west coast of the Malaysian Peninsula to Langkawi Island. She has since sailed extensively, and at a cruisers leisurely pace, around the islands of Malaysia, Thailand and Myanmar.

Australian tax paid, Coomera would be ideal for an Australian buyer looking to extensively cruise these waters, before eventually enjoying the voyage home
The maintenance has been fastidious, the care of the vessel exemplary and the price will reflect the best that a discerning buyer could desire, with comfort and quality uppermost in their minds.

She has two double cabins, (one being a v-berth) both with leather seating and en-suites, with a glass enclosed shower recess in each and toilets powered by a Jabsco Electric Fresh Water Flush system. The aft cabin being the luxurious, light filled owners cabin with a free standing, elevated queen size bed, ample storage and hanging space and an enviable 7 foot headroom throughout the cabin and the living areas of the yacht. All opening hatches and portholes are fitted with permanent shades and insect screens.
From her air conditioned plush and natural light filled interior, her galley, lounge and navigation area, all have to be seen to be believed. She comes fully equipped, from kitchen utensils to bed and bath linen.
Powered by a Yanmar 4JH4 75hp Turbo engine with low hours, and the engine bay being accessible on three sides and noise insulated, she cruises at 2600rpm at 7kn with a top speed of 8kn at 3200rpm. The bow thrusters make docking, berthing and maneuvering in tight spaces easy, with the controls conveniently situated at the helm.
Coomera was factory supplied with a 19m alloy mast and s/s rigging, the rigging replaced in 2016. She features a Furling Mainsail and Furling Headsail. Her extensive array of electronics include a Raymarine E120 Plotter, Radar, Sounder. AIS, GPS, Icom IC402 VHF and Wind Instruments.
Coomera's large fully equipped galley includes two Evercool Fridge/Freezers, one upright floor mounted, the other box style with bench top access. Twin S/S sinks, Corian Bench Tops, a three burner gas stove top with range hood, grill and oven. A convection microwave and plenty of storage complete the picture.
Her saloon has large dining area seating for 8 with extendable table and extra lounge seating opposite.
The separate Nav Station with dedicated seat and desk are also in this area.
Timber Joinery right throughout the yacht is of excellent quality and has been well maintained.
The engine and 15kva Panda/Fischer Generator (which more than adequately take care of all your electrical needs) are located in the engine bay behind the companionway entry steps between the Galley and Nav Station and the new Victron 3000 Battery Charger/Inverter is housed under the dinette seating. Coomera also features 5 x 200amp Full River house batteries (new in 2016) and a separate Start Battery, a Bose Stereo System, 80cm TV, Air Maxx Wind Generator and 4 x 560 watt Solar Panels and LED interior and nav lights.
On deck the S/S Davits comfortably store the 6 person Highfield Tender/Dinghy with pontoons covered by a fitted removable UV waterproof cover, a 15hp Mercury outboard motor, an RFD 6 person Liferaft, a Water Catcher, 2 Epirbs, one portable, and all necessary safety equipment for extended cruising, including a solid S/S Lifeline Top Rail for extra safety while moving around the deck. An Australian Ziggy BBQ is fitted on the aft starboard deck rail next to the Princess seat.
Roll up clear blinds enclose the cockpit providing shelter from the weather and another living area, then there is a choice of two cockpit and deck covering sun tents to use depending on the weather.

This exceptional Offshore Cruising Yacht has been sensibly priced so why not enquire today and make an appointment to view her before someone else snaps her up.
You definitely will not be disappointed.

Seaspray Yacht Sales is a division of Seaspray Marine Services. Qualified Shipwright Services established and operated in Langkawi for 10 years.
+60174814869
+6049660231 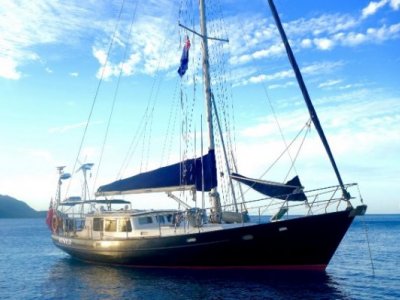 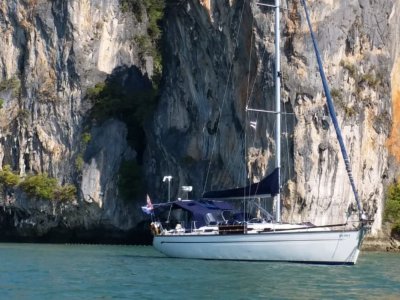 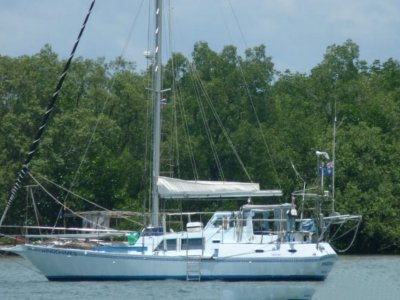 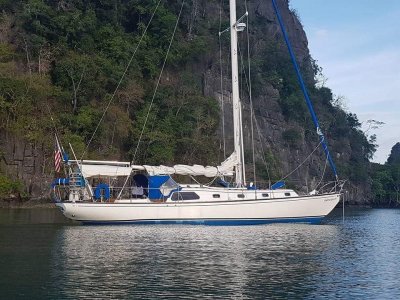