ARES is a proven, fibreglass construction traditional design with raised salon and walk-in engine room. She features spacious, practical accommodations and can be handled by a small crew. Additionally, she has twin engines, Stoway rig, two helm stations, two cockpits, and two draft options (courtesy of the centerboard) which provides great flexibility for maximum cruising pleasure. The recent extensive refit went well beyond paint and varnish. Systems, hoses, teak decks removed and glassed, countertops, re-chrome, window frames, engines serviced and generators rebuilt. In addition there are new Raymarine electronics (2014-2016). Hauled and bottom painted (March 2016). Fully updated and maintained by a meticulous owner, she is ready in every way for extended cruising adventures.

SeaBoats are International Ship Brokers & Yacht Brokers, marketing and selling a wide range of boats and ships, recreational and commercial, new and used, to broad global audiences. Our dedicated international teams of are strategically located around the world and utilize modern communication strategies and a vast network of industry associates.
Whether buying or selling, let the SeaBoats team work for you.
Price
US $1,195,000    Finance    Insurance
Boat Reference
1850
Launch Year
1982
Length
75' 6" - 23.00m
Beam
5.7m (18ft 5in)
Draft
3m (9.84 ft)
Vessel Location
Fort Lauderdale
Region
North America and Caribbean
Hull Material
Fibreglass/GRP
Engine
(2) Perkins 6-354 diesel engines, 135 hp, fresh water cooled (New 1993) Lube oil transfer system The twin Perkins 6-354 main engines were re-aligned and new motor mounts installed in 2012;
Engine Make
Perkins
Number Engines
2
Horsepower
135
Max Speed
9
Accommodation
Accommodations are provided for six owner/guests in three aft cabins. Two guest staterooms feature twin berths with a bureau between and ample hanging locker/drawer storage. Each includes an ensuite bathroom with stall shower, vanity and electric head. The port head also serves as the day head, with access from the central passageway.
The full-width master stateroom is all the way aft, with a queen berth to starboard and to port is a three-quarter berth and settee. There is a desk and good storage throughout with drawers, shelves and hanging lockers. Aft is the master bathroom with a large shower and sink to port and another sink and electric head to starboard. The passageway between provides access to the aft cockpit and the cockpit hatch providing ventilation.

Additional guest or crew Quarters
This include an additional two cabins for three people. The port crew cabin has a double lower berth and single upper berth. The starboard cabin features a large single berth. Aft of the crew cabins is the galley with crew dinette with seating for four. The washer/dryer is to starboard, across from the crew head. From the forepeak aft is a sail locker/utility room.

Main Salon:
Aft of the 'crew' quarters is the raised salon, with six large windows providing an abundance of light and visibility. Two windows, port and starboard, are opening, providing excellent ventilation. An L-shaped settee is to port. The large varnished hi-lo table can seat eight for dining, or, when lowered, serves as a cocktail table. Drawer storage has been redesigned and reconfigured for custom china and cutlery. The entertainment center is aft to port (see Audio/Visual). A lounge area is starboard with settee, full wet bar with sink, refrigerator, custom glass and bottle storage. Next aft to starboard is the navigation station. Aft and down four steps from the saloon are the owner and guest staterooms and the entrance to the engine room.

There is teak and holly flooring throughout, joinery work is teak, wallcoverings are neutral colors with teak trim and headliner is Ultrasuede.

Cockpit:
There are two cockpits on deck; a center steering cockpit with centerline helm aft and a second protected helm which is forward to port and an aft owner's cockpit with access from the master stateroom.

The center steering cockpit is large and comfortable; accessed from deck both port and starboard. The canvas dodger and bimini provide protection for the entire area. To starboard is a refrigerator/freezer for drinks; to port is the protected helm. The large centerline drop-leaf table can seat up to eight for dining. Settees port and starboard in this cockpit have been widened for more comfortable seating and also to accommodate outdoor sleeping. The second steering wheel is aft of the table, allowing the helmsman contact with guests.

Refit and maintenance:
The spring refit in 2014 included rebuilding the main centerboard tackle. This included fabrication of a new S/S centerboard trunk cap, pennant, and S/S compression tube. All of the sheaves were removed and serviced. Before going back into the water, the bottom was sandblasted, barrier coated and painted (2014). 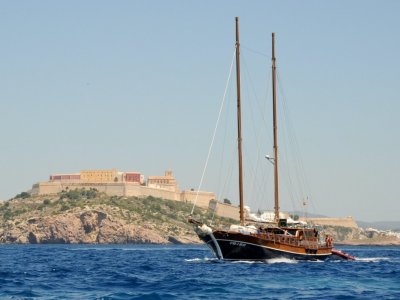 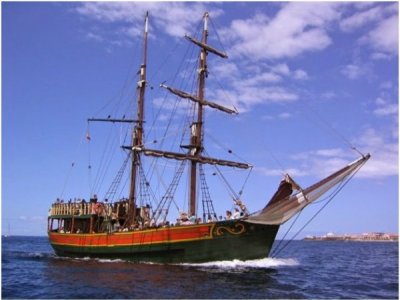 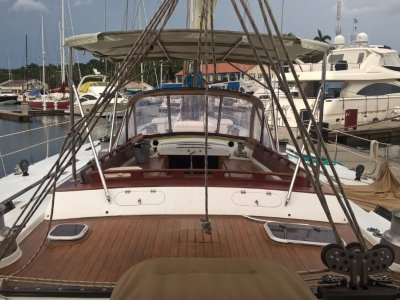 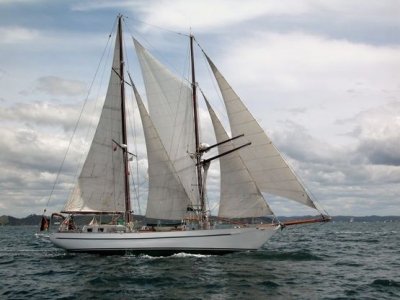