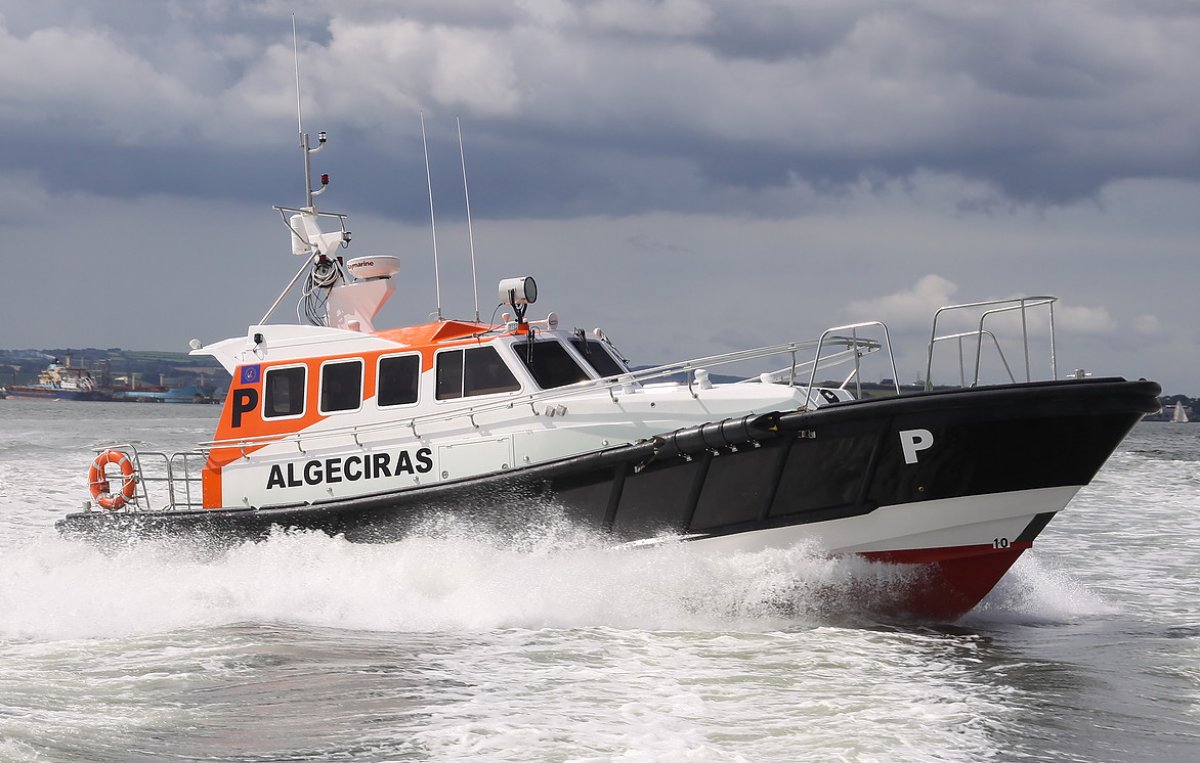 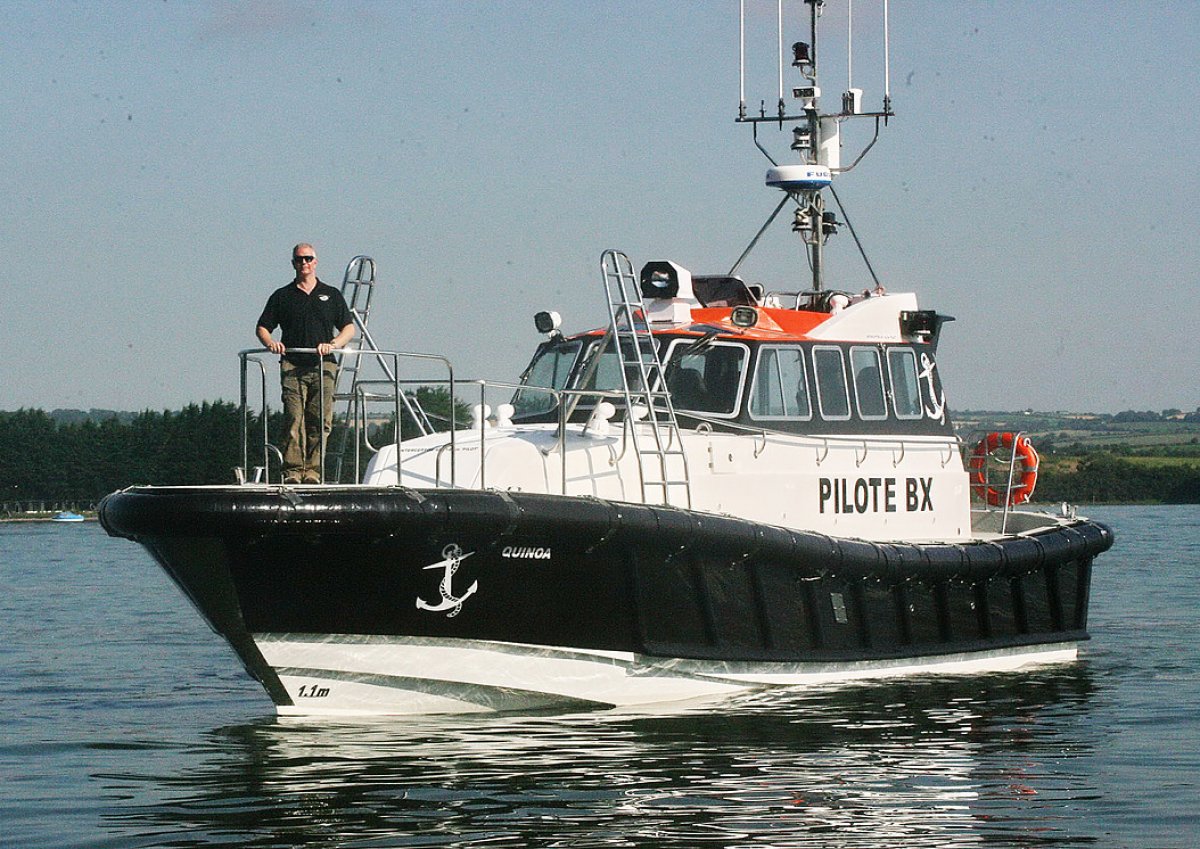 
This model was chosen by the pilots at Bordeaux who have to deal with very challenging and at times dangerous seas at the entrance to the Harbour where big Atlantic swells from the Bay of Biscay meet the strong 3-4kt ebb tide from the Gironde River and rage with special violence causing breaking seas at the Bar that reach over 10m in height during winter months, the Pilot vessel is expected to be able to navigate the Bar safely in up to 5m wave heights. An important part of the design brief was for the Interceptor 48 to be fully self righting in the event of capsize by virtue of her high buoyancy superstructure and consequently the vessel has been built with numerous features such as automatically closing air vents, 15mm thick windows and watertight cockpit doors. In addition the superstructures forward windows are aft sloping to minimise pressure loadings when taking green seas over the bow, (a fairly regular occurrence due to the extreme conditions she operates in) Another advantage of the Interceptor 48 is the inclusion of a large and spacious forward cabin, this is achieved by virtue of having her engines installed further aft under the main cabin, where they are subject to less loadings and accelerations in rough seas, and are quickly removed in the unlikely event of failure through hatches incorporated in the main cabin sole and cabin roof. The forward cabin on Quinoa features bunk berths allowing the pilots to rest and relax comfortably during transits at night time, and provides increased seating capacity that can be utilised in an emergency, or when additional passenger seating is required.. Quinoa is fitted with Safehaven's unique pilot boarding ladder design improving safety for pilots when boarding but causing minimum obstruction to visibility. Quinoa was built under Bureau Veritas survey to the strict French Maritime authority requirements.

The vessel was delivered at the end of September by Olivier Barreau, the pilot specifically involved in overseeing her design and construction whom became good friends with Safehaven's owner and designer Frank Kowalski during the 12mths of her construction. The 500nm voyage from Ireland to Bordeaux was completed in challenging conditions, after completion of the voyage Olivier sent an account to Frank an extract is quoted here: "Conditions continued to be very rough especially off the Island of Oleron where we had wind against tide with very steep 3-4m waves off the bow, we had to reduce speed here and I negotiated the seas comfortably by swinging the bow off the crests so she didn't fall heavily into the troughs. We continued on towards Bordeaux, and when some 5nm offshore we slowed down to take bearing and to line up at the entrance to the harbour mouth and run NE to the river entrance. This course put us beam on to the seas at the entrance to Bordeaux which was quite stressful, as it was night time, the wind strength was Force 6 and the 3.5m offshore swell in Biscay was running straight into the entrance of the Gironde river meeting a 4kt ebb tide, and to make maters worse it was near low tide causing the waves to break strongly over the bar where they were reaching over 5m in height. But beam on to the waves Quinoa was very stable so we had no concerns as at this point we had a lot of confidence in the vessel. At the outside of the Bar we turned to the SE to give us a straight run with the seas dead astern to cross the bar. We ran in at 1700rpm, this gave us a speed of 14-15kts with Quinoa accelerating to over 28kts when surfing on the face of the larger waves. Quinoa handled very well as she crossed the bar with waves breaking around us in what were quite dangerous conditions, especially as it was during the night, yet at all times we felt safe. Certainly some corrective helm was required to stay on course when she swung away to port or st/bd a couple of times, but we always maintained control and what impressed us most was how stable she was, staying almost level with very little heeling, in fact she was as stable as our much larger 17m vessel in these conditions. We came alongside at 11pm after travelling over 500nm from Ireland almost non stop in 24hrs averaging over 20kts. Quinoa has proved to be a fantastic vessel and I am very happy with her, My conclusion is of a pilot boat with excellent sea keeping, and I must say Frank that at all times throughout the voyage we felt completely safe in her"

Interior
The Interceptor 48's interior is finished to a very high standard, fully lined throughout in vinyl & sidelining carpet with black gloss or wood effect laminates, teak and holy cabin sole or studded rubber, crafted wood trimmings produce an exceptionally luxurious environment for her pilots and crew. 4-6 reclining air suspension pilot seats with side bolsters will give a comfortable ride in rough weather.

The Interceptor 48's interior is finished to a very high standard, fully lined throughout in vinyl & sidelining carpet with black gloss or wood effect laminates, teak and holy cabin sole or studded rubber, crafted wood trimmings produce an exceptionally luxurious environment for her pilots and crew. 4-6 reclining air suspension pilot seats with side bolsters will give a comfortable ride in rough weather.

The helm position has been especially designed to provide the ultimate comfort and control for the helmsman, the design wraps around with all instrumentation clearly visible and all the vessel controls have been ergonomically designed for comfort and visibility. The 48 is fitted with a sophisticated, state of the art electronic navigation system.

Engineering
The Interceptor 48 is typically powered by twin Volvo D12 / 13 500/550hp engines and twin Disc 5114 or SC Quick shift gearboxes providing the vessel with an operational speed of 24-26kts. The vessel is 14.7m LOA, with a 4.3m beam and 17,500kg Displacement. The pilots are well catered for with the vessel featuring air conditioning with high level outlets throughout the main cabin providing a comfortable environment. Double glazing on all windows ensures good visibility is maintained at all times without the usual problems of misting in poor conditions. A very high level of fit out has been undertaken, with teak and holy cabin soles, walnut Formica laminates and trimming ensure the 48 provides a luxurious working environment, augmented by very low noise levels of just 75db. 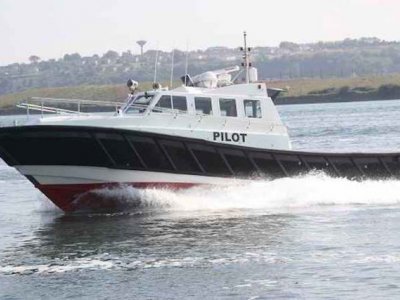 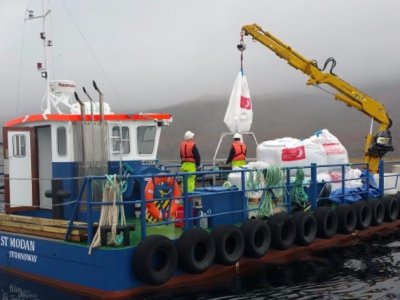 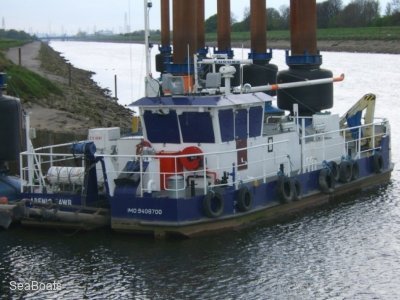 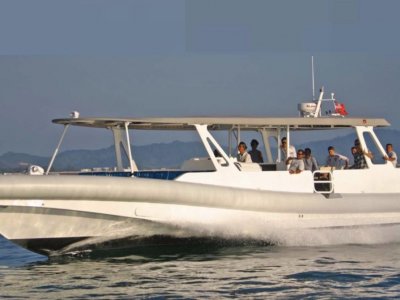