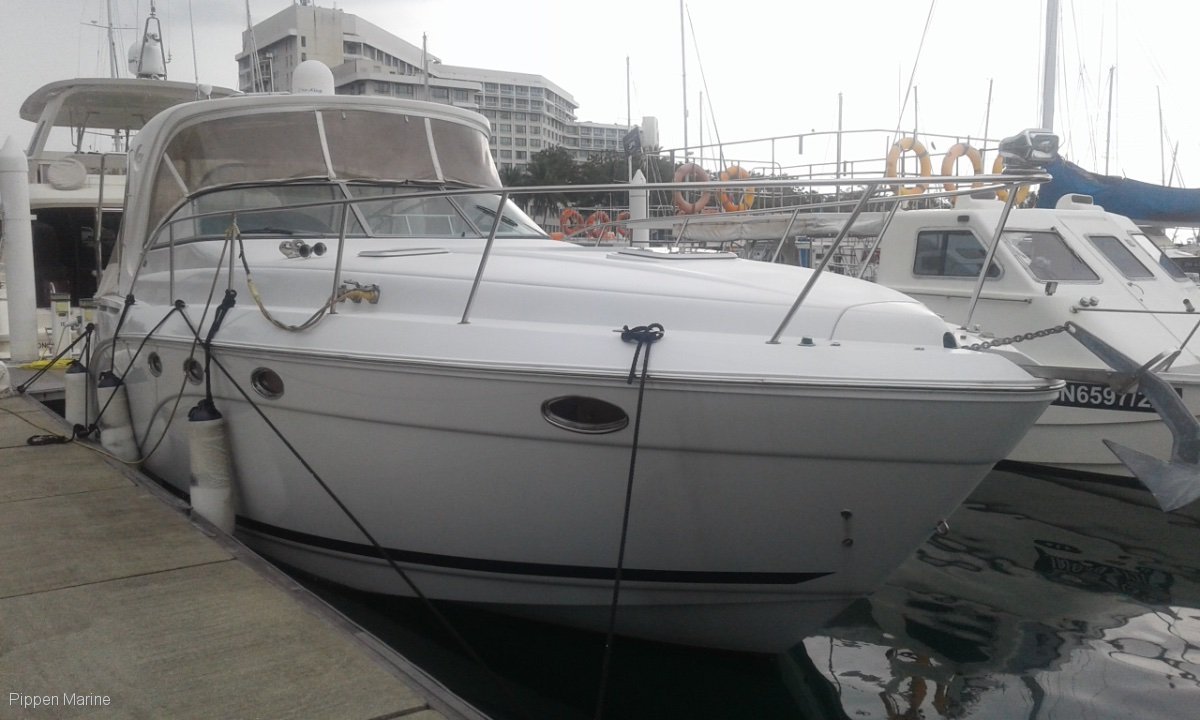 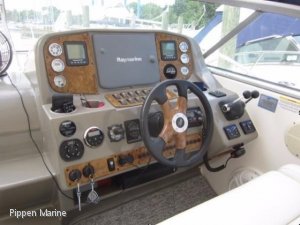 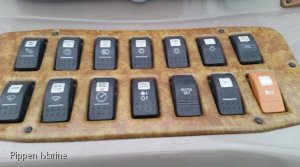 
The American built RInker 400 Express Cruiser recevied very positive reviews at time of release onto the market.
This example of the model has been reported and appears to be in well-maintained condition.
Replacement of Bimini, cockpit seat covers, fridge, Microwave Convection oven, TV in 2016.
Last known haul and antifoul was end of 2016.
Currently registered under the SSR (British)
This vessel is part of a Deceased Estate - All relevent legal documentation is in place.
Awaiting further information on Navigational Electronics and higher resolution photos - thank you for your patience.
Located in East Malaysia - inspections strictly by appointment only.

Below Quoted from: Rinker dot com website:
THE RINKER HERITAGE

In the 1930s dairy farmer Lossie "L. E. " Rinker started building fishing and racing boats out of his workshop on the White River in Indiana. Following the Korean War, L. E. 's sons, John and Jan, joined him in establishing Rinkerbuilt in Syracuse, Indiana.

From that point on, Rinker has stood at the forefront of American boating, bringing innovations to the market, such as fiberglass construction and tri-hulls, long before most of their competition. In the 1960s, Rinker saw the demand for their product expand internationally and come the 1980s Rinker expanded into express cruisers and increased the power behind the then entitled "Captiva" line.

The Rinker 390 Express Cruiser I sea trialed recently boasted a number of "firsts. " It was no wonder that company people were saying it was a different way of thinking about big boats. From her outward look to her interior volume, plus a few features not readily apparent, the 390 displays an innovative direction in express cruiser design. What's more, Rinker is known for filling its boats with a long list of standard features, making the 390 an exceptional value compared with others in her class.

The Bold and the Beautiful

One of the first things you notice when approaching the 390 Express Cruiser is how bright she looks compared with others along the dock. For the 2006 model year, Rinker is using what it calls "Pure White" gelcoat. The process really makes the graphics pop. Our test boat was fitted with a Bimini top, but the 390 is also available with an optional hardtop. I was impressed by how easy it was to use the bungee cord fasteners that took the place of snaps to hold the canvas in place.

The boat has a two-level cockpit. On the upper level, the helm, with its doublewide seat, is placed to starboard and the C-shaped seating is to port. There's walk-through windshield access to the foredeck. Instruments and controls on the helm console are placed on an attractive simulated burl wood background. A large space at the center of the panel is allocated for an electronics screen. Our test boat had a Raymarine C-Series display there. It makes sense to put navigation information at the center of the action so you can quickly reference it at a glance. Those four stainless steel cupholders at the helm might seem like overkill, but think about it. Cupholders hold more than cups -- for example, sunglasses, a hand-held VHF radio or sunscreen. You'll likely find something to fill them all.

The lower level of the cockpit features a galley equipped with a refrigerator and an ice-maker, along with a sink and a built-in blender. An electrical panel here controls the electric engine hatch and stern locker hatch, cockpit lights and an underwater swim light. The rear cockpit has seating for seven around a removable table that stows in the stern locker.

The high hull sides that give the 390 Express Cruiser a brawny stance aren't done for looks alone but to increase the interior volume. One step inside the cabin and you'll see why. There's up to 6 feet, 10 inches of headroom throughout. A two-stateroom layout -- instead of the usual three on a boat of this type -- gives both sleeping quarters a very open feel. The forward master suite has a queen-size berth set against one side of the hull V. A flat-screen TV is standard for the compartment and includes a built-in DVD player. The head, accessible from either the master suite or the salon, features a separate shower stall.

The 390 Express Cruiser's aft cabin is exceptionally roomy because the boat uses stern drive instead of inboard propulsion. The standup headroom at the foot of the twin berths measures 7 feet. There's a standard flat-screen TV with a DVD player here, too. The cabin has a built-in vanity with a sink.

The main salon on the 390 features Rinker's new satin-finish cherry veneer cabinetry with brushed-nickel hardware. All countertops are Corian and have a fiddle edge. The galley has a recessed two-burner stove, a refrigerator, a microwave/coffeemaker combo and a stainless steel sink. Our test boat had optional teak flooring that matches the top of a hydraulically operated dining table. Standard flooring is carpet and the manually adjustable table has a cherry wood top.

The 390 Express Cruiser I was on had a notable "first" in the form of a technical innovation. It was the first production boat ever to be equipped with MerCruiser's new SeaCore system. Mercury claims it is the most corrosion-resistant system in the industry. SeaCore is engineered to provide three stages of protection from saltwater damage. All components are anodized with a case-hardening process that seals the surface. Then they are coated with a layer of electrically deposited epoxy, followed by an acrylic topcoat that provides shielding from ultraviolet rays. Mercury confidently warrants the drive against corrosion for five years.
CONTACT DETAILS
Dealer
Pippen Marine 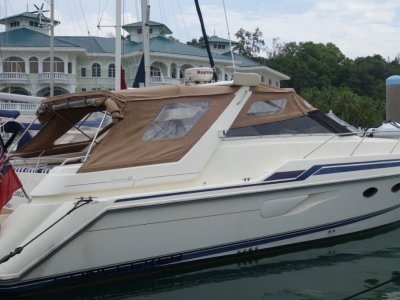 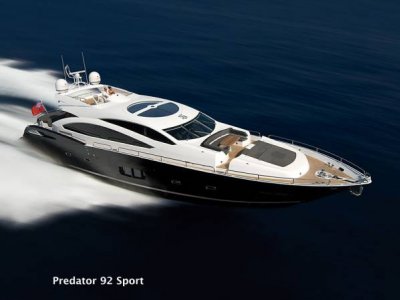