Aleka - The First Bali 4.4 To Arrive In Australia 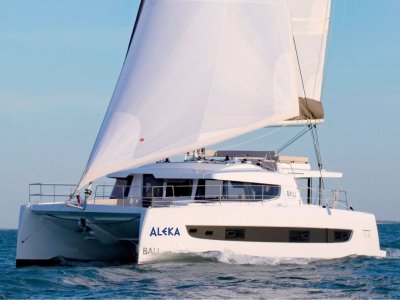 Aleka has now been commissioned and handed over to her owners with the first of the eight on the water in the Whitsundays as we write.

At the end of November Aleka will head south with a delivery skipper, Larry Jamieson, and another two of her owners, to the summer base at Soldiers Point Marina in Port Stephens. The marina provides a courtesy vehicle for pick up at Newcastle Airport and Port Stephens offers some exciting cruising grounds within the Bay and along the shoreline north and south from the entrance.

Aleka has a berth at the Soldiers Point Marina, with reciprocal access to Bobbin Head on Pittwater and Gladesville Marina on Sydney Harbour, both providing full member service to syndicate members.

The second Bali 4.4 will be delivered in May 2023 after her debut at the Sanctuary Cove Boat Show 25 – 28 May 2023. She will then head to the Whitsundays for the winter season. There are only 3 of the 8 shares remaining in this Bali.

We have five of six shares available in a fully optioned glamour yacht, the highly acclaimed Dufour 530. Apart from the upgrade of the engine to 110 HP, this Dufour is fully air-conditioned and fitted with water maker, generator, solar power, rolling code zero on the forestay, fully battened main and for the cruiser a self-tacking jib. In all she has €222,500 in factory options.

5 shares are being offered as a special lot price of €558,550 representing a saving of €109,000 on current Dufour pricing. The contract entitlement is five months on the water during the high season between April and the end of September plus basically unlimited usage during the off-season.

The service by Yacht Share Mariner at the base in Marmaris is a walk on walk off experience for the owner. The walk on walk off service includes cleaning of the yacht inside and out, laundry and access to pre-provisioning. As the owner you just turn up, untie the ropes, and begin your Mediterranean sailing adventure.

The yacht will be based in Marmaris in Turkey in year 1 of the 3-year contract, after which, depending on owners' preferences, she may go to Croatia in year 2 and Italy in year 3. Because the Dufour is not tax paid she will winter in Turkey at the end of each season.

With the market for used boats so strong the probability is you will get at least 75% of your outlay back after 3 years if you wanted to jump out of the syndicate.

This is liveaboard sailing at its’ very best.

And for Cat Lovers

The Astria 42 with owner layout, from Fountaine Pajot will be coming off the production line in mid-2023 and will sail to Marmaris in Turkey during the middle of the season. The division of time will be equitable for the balance of season 2023 and management will continue normally but the 3-year contract won’t begin until 2024.

The Astrea will spend the end of the season in Greece and Turkey so she will be closer to home base for any warranty work; unlikely however given that the builder is Fountaine Pajot.

The cost of a 1/6th share in the Astrea is AU$195,000 with this AUD amount guaranteed by a foreign exchange contract that eliminates currency risk from the equation. Operating costs are billed to the syndicate at net by Yacht Share Mariner and the management fee of $5,000 per shareholder per year is paid in quarterly instalments during the year.

In the subsequent years of the management contract, where the yacht may be moved to another Dream Yacht port in the Med, the composition of the syndicate may change and at the end of the contract the management may be extended, or the yacht sold.


For more information, check out: https://yachtsharemariner.com/